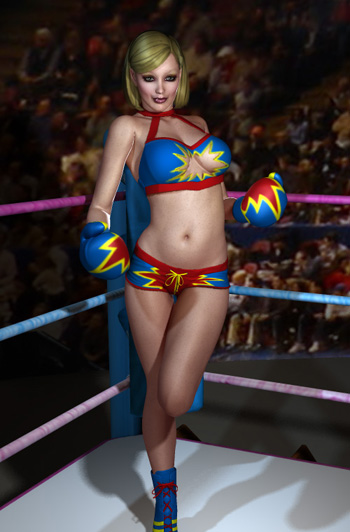 Tracy Tatum brings a blast of explosive energy to the Beautiful Angels of Boxing Entertainment organization! Lifting her look out of the pages of a comic book, Tatum sees herself as a modern-day hero and as a symbol of hope and strength for women everywhere.

A star athlete in high school and college, T’n’T (as her friends called her) pushed herself to her limits. A part of her motivation came from how she was treated by others for her cute, perky looks. Her peers never took her seriously and thought she was just another pretty face. But Tatum wanted to show everyone that she was more than that… she wanted to show them that she was a woman of power.

Her ultimate challenge was the world of competitive boxing. To the surprise of friends and family, she proved herself to be a powerful fighter with a winning personality. Inspired by childhood superheroes, Tracy Tatum hopes to blast through the ranks of B.A.B.E. with a healthy dose of T.N.T.!