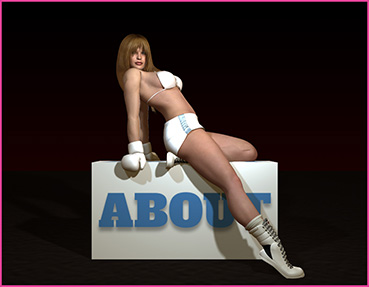 This project began over 10 years ago, first, as just a silly idea: What if G.L.O.W. (Gorgeous Ladies of Wrestling) featured boxers instead of wrestlers?

I was bored one day and made up fake boxers in the style of those wrestlers and came up with a group of faces and heels. Using Photoshop, I made up my own images by tracing over comic book art and putting characters together to make fake matches. I hoped, at the time, I could get someone to write stories associated with these images but that never happened.

Years later, I accidentally downloaded Poser (thinking I could get JPG reference images to trace over). Little did I know this program would actually allow me to breathe life into these characters!

Thus was born B.A.B.E – Beautiful Angels of Boxing Entertainment! This site will feature the stories of these boxers along with the matches, in the style of wrestling entertainment. You can purchase the majority of these fights at my Lulu page. I’m going to start out with all this stories you may have already seen on my DeviantArt page. But, hopefully, this site will catch up to new stories. (Don’t worry, I’ll still be uploading to DA!)

Personally, I am a huge fan of foxy boxing and wrestling, probably since that Popeye cartoon which featured Olive Oyl boxing.

I like boxing between well-defined heels and faces. I like the boxers in foxy boxing outfits which, to me, means boxing boots, tight short shorts, skimpy top, and gloves.

Topless boxing is okay to me, but I do prefer a skimpy top. I’m not that into nude boxing because the clothes leave more to the imagination.

I’m also not into mixed boxing. I want women facing each other.

My biggest influences are GLOW, WOW, POWW, WWE, and all the great boxing art and 3D art that has come before.

Also, it’s very important to note that I am not the artist here. So many great people have made their figures, clothes, props, etc. available on Renderosity for others to use. I purchase those figures, tweak them, and use them to create these stories and matches.

So… what to expect? The bulk of the stories will revolve about the B.A.B.E. fighters in their ‘current’ season. Originally, the ‘show’ started out as a season-based show, in the vein of G.L.O.W., Gorgeous Ladies of Wrestling. But, mid-way through the second season, things changed so that the show was just continuous (much like WWE wrestling shows).

So, with that in mind, you’ll get the current season/non-season of B.A.B.E., plus some ‘flashback’ bouts to the first season of B.A.B.E. In addition, you’ll get foxy boxing stories from before B.A.B.E. was an official league… stories that led up to its creation. You’ll also get some stories from the international foxy boxing scene. And, in time, I’ll be adding stories from F.L.O.W., the Ferocious Ladies of Wresting, a wrestling league that shares a connection with B.A.B.E.

My hope is to get these stories up in the same order as they were originally published. (And, most will be available on my Lulu site… some stories will be free here!) I toyed with the idea of redoing some of the early stories, based on what I know now with Poser, but I’ve decided to keep the stories as-is, warts and all. That way, you can see how the quality has progressed over time. (Plus, redoing those stories would slow me down on new ones!)

So, with that, I hope you enjoy B.A.B.E., the Beautiful Angels of Boxing Entertainment!