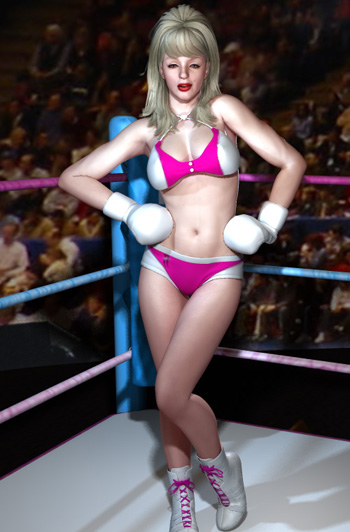 Margot Moore fought her way up from a rough upbringing. Throughout her life, she was reminded of her famous lineage… the granddaughter of a past icon whose celebrity crumbled before her. Margot worked hard to prove that her destiny was not tied to the example set by her family past.

Nonetheless, Margot used the physical gifts she was endowed with to make a name for herself on the local entertainment circuit. Soon, she became one of the top showgirls in the biggest casinos and eventually earned top billing status.

But what kept her so in shape? Her first love, boxing, which was a sport she grew to love despite the negative view her parents had toward the sport. She pursued this love to the point of competitive action and proved herself a formidable opponent. Many sportswriters saw her as the heir to a past boxing glory.

But Margot Moore has shown that she is much more than a legacy fighter. She is her own woman forging a new legacy for herself.